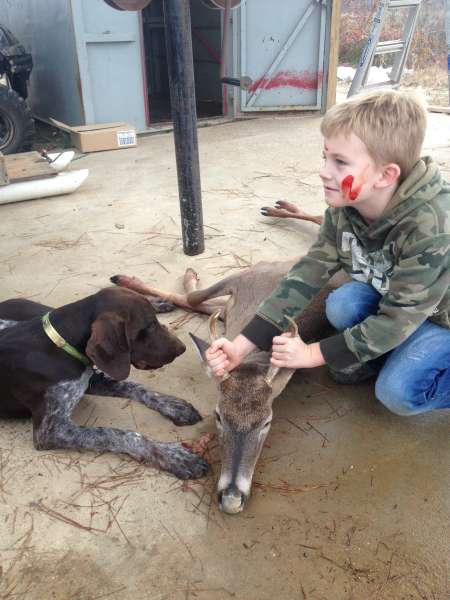 This one is my favorite.

A little boy sent me a text message I was hunting just up the road from him and his dad. Hey Mr. Jody, I got one. I told him just keep hunting I would be there in awhile. As I sit in my deer stand I remembered how excited I get when I shot a deer. I thought this is a nine year old he is about to have a fit to get his deer. I got down and went to him. He ran down the stairs of stand and straight to my 4 wheeler jumped in and told his dad he was going with Mr. Jody to get Cash. We got the dog put him on the trail approximately 125 yards there he was. 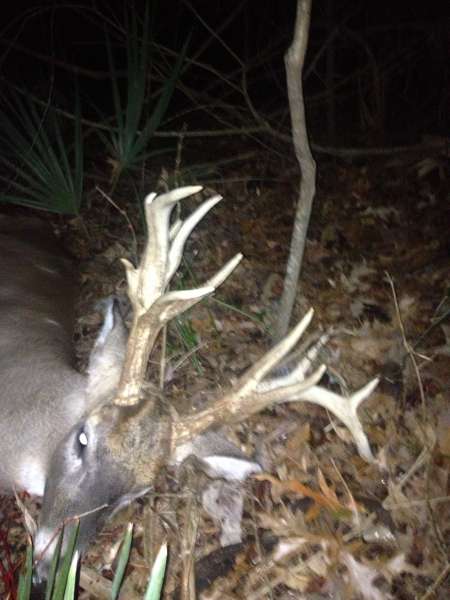 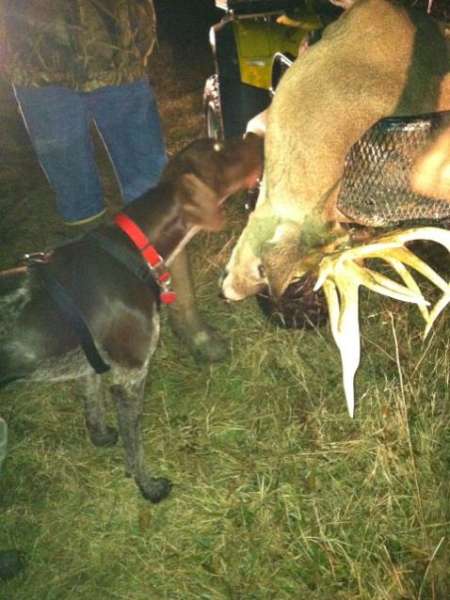 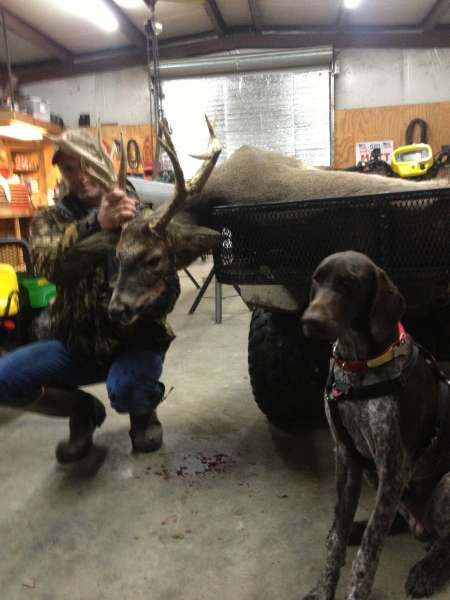 There lay the deer of this mans life time.

Man called me to come track a deer he had shot. When I got there he told me he had tracked the deer to some water and lost the blood tail. I told him to show me where he had seen some blood and so he did. I put my dog (cash) on the trail he tracked him down to the water and about 10 more yards to a fence. I told the man I need to get around fence .he told me there was a opening about 40 yards back . we went around and came back up the other side. We got back to the water went about 10 more yards cash took a 90 degree turn where he turned was straight across fence from where we were on the other side. Cash tracked through the water 20 more yards we came out on dry ground there was blood there. We went approximate 60 more yards. More water 25 yards of it Cash went straight through it. Back on dry land for another 40 yards. We came up on a big slough of water. This body of water was knee deep and 40 yards wide. We came out the other side blood every where. Cash was still on him. We went approximate 250 yards through the thickest woods ever. There lay the deer of this mans life time.

Your methods and structure were simple, easy to follow and, most importantly, effective.

I wanted to write and thank you for all of the help you have provided in the training of Natchez and Diablo, both in obedience and basic tracking. Obedience training was a first for me, as I have never gone through this before. Having been advised by many of its necessity with Catahoulas, I decided to contact you after a web search. I am glad that I did. You made the experience both entertaining and tainless. Your knowledge and ability to get the dogs to heel and obey the basic commands was impressive. I knew you were a superior trainer when you could take any dog, no matter how much trouble it was giving the owner, and have it performing the desired task within thirty seconds generally, and two minutes at the most. The class was well worth the weekly drive across the lake. Prior to this, I had observed obedience classes from time to time here in New Orleans which struck me as more chaos than training. Your methods and structure were simple, easy to follow and, most importantly, effective. Any difficulties I experienced were due to my not following through with homework and not with your teaching. The first day of tracking class, I harbored a few doubts as to how in the world having my dog sniff the ground and run a few yards to me in a wide open field was going to help it learn to trail a specific deer in the woods. Given the difficulty I somethimes have with the "come" command, I was thankful they ran to me as opposed to taking off (obedience traiing does work). Keeping in mind that you are good with dogs and train for search and rescue, I had faith and persisted. The dogs became quite good at tracking me, my son and Rick Franco, but I was still not convinced that this was oging to translate into finding a wounded or dead deer. These concerns were allayed the first time you laid out a scent trail using a small piece of deer hide and dribbled blood over it. The dogs' excitement when they cam across the blood was impressive. I knew then that they would be able to find a deer. Two things in particular stand out from the tracking class. The first is your showing us how scent may pool away from where the actual object being sought is located. On that day, every dog first went to the "wrong" side of a large forked tree where the scent had pooled from the opposite side. Second, I really enjoyed working at the Pearl River locks where more realistic and difficult scent trails could be laid out. Not every attempt at finding a deer has been successful. There have been two failures, both under very difficult circumstances. The first time the dogs tried to find a deer, there was only a single small drop of blood in the woods 75-80 yards from where the deer had been shot. The hunter had tramped around contaminating the area for more that an hour before he called me. It was my mistake to make this their first effort at a real deer. The second was this year in the rain. It was simply asking a little too much. There have been a number of successes. One that was particularly gratifying for me as a Catahoula owner occured this year. They chased and bayed up a wounded deer three times before we finally caught up with them. It was nice to see that Catahoula instinct in action. Finally, I want to thank you again for all of your help and assistance. This goes far beyond the classes I have taken. I appreciate your willingness to take time to talk to me about problems with my dogs both in person and over the phone. I did not purchase my dogs from your kennel, but you have been kind enough to provide me with the benefit of your knowledge and experience whenever I asked. I will always be grateful for this.