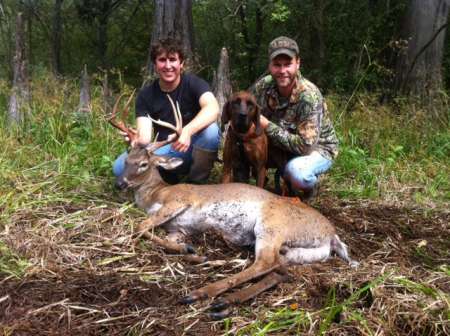 Thanks again for your high quality of training.

JJ went on his first real track yesterday. The deer was shoot Saturday afternoon around 5:00 PM. I received a phone call that JJ's services might be needed. I arrived at the camp and started the track around 1:00 PM Sunday. JJ was impressive on this track. He followed right over blood for the first 50 yards or so and started moving to the right away from the blood. He tracked through a cypress bottom full of water and came out the other side right on top of blood and other deer tissue. Where JJ came out was 15 yards from where the deer had eventually laid down to die. He did a great job and you would be happy to know that when he got to the deer, he acted like he was supposed to. It took everything that I had to get him off that deer and taking pictures was challenging to get him to look at the camera. I have included a picture of the find. Thanks again for your high quality of training.

Hopefully I will be sending more photos of his finds this year. 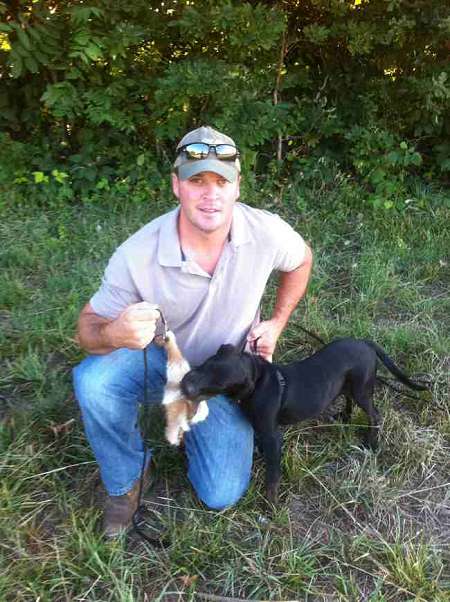 A couple days into the training my confidence began to grow.

When Don Abney asked me to write a short article on the training that I have been doing with my new pup Gunner, I couldn't have been more excited. This type of training and tracking is new to me. I have been amazed by the way that Gunner tracks with ease.

To start I would like to tell about myself and my history with hunting and dogs. Since I was born I have been exposed to hunting dogs, mainly Labs and Beagles. I have always enjoyed training dogs for their specific jobs. In doing so, over many years I have developed my own technique for various training (like any hunter would do). Most involve a lot of frustration and confusion to why my dog doesn't respond the way I think it should. Over the years I have been very lucky to have had some great dogs, and nothing makes me happier than to see a good dog work. I say all this to bring my next point.

When I became interested in Blood Dogs a friend of mine told me that he knew a guy that sold just such a dog. After the first phone call Mr. Abney told me to check his website to get a better understanding of what kind of operation he was running. Immediately after hanging up I hit the computer and for next couple of hours I learned a great deal about Catahoulas and what they had to offer at Abney Catahoulas. To say the least I was impressed. The more I talked and shared stories with Mr. Abney the more I decided to abandon my methods of training and follow the instructions Mr. Abney had been telling me about.

I received my pup on June 13th. Along with my new dog I was given a typed report on the specific training techniques and verbal commands to use. Another very important piece was the page that talked about how the dog viewed me as the trainer. Just by reading through a few pages I already had a better understanding of how my dog would react to my training. I am no different than any other man out there, all the stories and reading material are useless to me if the dog doesn't perform in the field the way he should. To say I was skeptical would be an understatement, but I had already decided win lose or draw I was sticking to the plan laid out by Mr. Abney. He told me the dog was ready and that he was capable of doing the work of a grown dog. Keep in mind that he was 4 1/2 months old when I got him.

I started with a couple short tracks, probably 75 yds long. When he worked those out I couldn't believe it. A couple days into the training my confidence began to grow. The next morning I laid a track across a bean field and turned down the wood line making the track approximately 150 yds thinking this might be tough on him. When I showed him the scent line he took off like there were arrows on the ground leading him to it. He made the turn and never checked up until he stuck his nose on the hide I had hanging. 10 days into the training and I am already starting to have a hard time coming up with ways to challenge him. I have started going through thick woods and turning up steep hills leaving the woods and crossing pasture, thinking that changing the surroundings might throw him off. Not a chance! When he starts out on the line he has his head down and zig zags back and forth on the line. The farther he goes the faster and straighter he gets. I have begun to learn his body language better every day we go out. When he over runs a turn he gets about 30-40ft past the turn and stops and starts looking around (he is actually checking the air for any scent he can find). If he doesn't smell anything he works back towards me. When he hits the line he is off and running again. He enjoys it so much. When he sees me get the harness out he turns into all business. I do my best to make it a fun game for him and you can tell he really enjoys finding the hide. On his last track I laid a line about 150 yds straight line then turned left and actually started to work back toward the direction that I started. About halfway through the track he stopped put his head up hung a left and ran straight to it. I couldn't keep up because he was running so fast so I let go of the lead because I knew he was headed straight for it. Even as young as he is if he gets within 100 yds down wind of the hide, he's got it! When he got to it he stuck his nose to it and then turned back and came running to me as if to say "did you see that, I found it". I immediately praised him and sent him back after it and that's when he really attacks the hide. That's how I made it a game for him. When he finds it and shows it to me we begin to play fight over the hide. Of course I let him take it but he looks so proud strutting around with that hide. Every day I look forward to training with Gunner. I have never become so attached to a dog so quickly in all my life. This breed of dog is new to me but everything I read and researched about them has come true. He is very quick to learn and it's almost as if he is one step ahead of me at all times. I have no doubt that this fall when I get the call that someone has lost the track on a buck of a lifetime that Gunner will do his part when called upon.