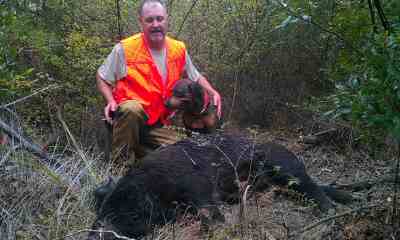 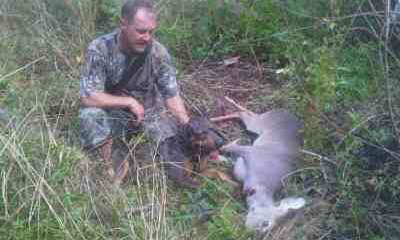 A well trained tracking dog is worth his weight in gold.

Abcantra did a phenomenal job training our Catahoula for tracking. We are very pleased with the results. He has found multiple downed game for our hunting club both with and without clear sign of the start of the track.

On at least one occasion, we had nothing to go on but a scuff in the dirt where a club member shot a wild boar and took off running after it was shot. After they hunted and hunted for it they called us. When our dog was put on the scuff mark, it was located within minutes in heavy brush.

A well trained tracking dog is worth his weight in gold. 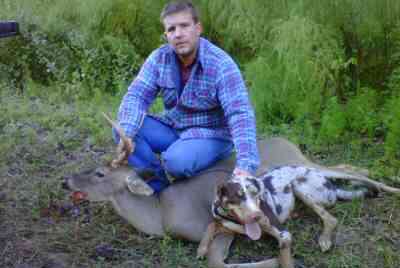 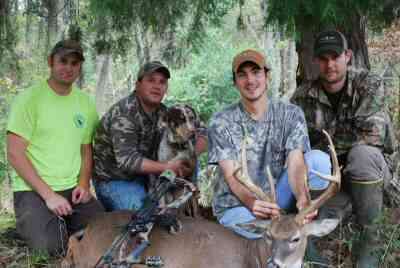 I have referred everyone who has asked to Don.

My catahoula pup Rowdy started with Don at 5 months old, obedience and tracking program, and was told he would call me when the dog was finished. Well 6 weeks later Don called and said he was finished, i have to admit i was a bit apprehensive being such a short time with such a young dog....Well all worries were quickly lifted when i laid eyes on what my wild puppy had become. Rowdy took all obedience commands quickly and correctly and made the tracks we laid around Don's property for him look easy.

We started hunting season 2 months later and couldn't have been more impressed with how my puppy was performing. Throughout the season he found over 14 deer for us, some of them we knew where they were and let him practice, but he also found 5 deer we had given up on and 2 of those he recovered were day old tracks. And this was all before he was 10 months old.

I have referred everyone who has asked to Don, including wardens from Angola State Prison who have sent their personal dogs there to be trained. Overall i was very impressed and happy in my experience with Don and as soon as my wife lets me get another dog I will be sending him straight to Abney Kennels.

Don's patience and experience as a teacher and trainer have been the best.

I have had the pleasure of knowing Don Abney for 12 years now. We first met when I was stationed in New Orleans with the Marine Corps.

I decided that since I now had the time to have a dog that I would get a "tracking dog" to assist in deer recovery. After much research and meeting Don, I immediately decided that a Catahoula was for me. I was fortunate enough to receive a pup off of Bear, Don's Grand Champion. At the time I was an active duty Marine Captain fresh off a deployment from the Mediterranean and knew that I had better take some sort of obedience class if I was going to survive.

Don's patience and experience as a teacher and trainer have been the best I have experienced. Needless to say Turbo, my dog, and I were hooked. We both enjoyed the training, the challenge and most importantly the fun. After Turbo and I were both obedience trained I decided it was time to take the tracking class. This was the whole reason I had decided on a dog in the first place. Don put on a 9 week class that took us from the academic principles and theories of tracking to practical field applications. During those 9 weekends, our instruction was broken down for us in bite size portions of information that allowed both handler (myself) and tracker (Turbo) to digest and absorb. One of the most fascinating principles that I learned from the course was that although we were in blood tracking course specializing in deer, Turbo could track anything that had scent after the basics were mastered. This was evident in the early stages of tracking class, when the tracker is taught to seek the handler in a "hide and seek" sort of game. After the 9 week course and our graduation I am pleased to tell you that Turbo through the years has found about 10 deer that were in need of recovery.

There are two memorable finds that I want to share with everyone. The first was the hunting season of the same year that we finished the class. I had a lease in Mississippi for bow hunting that I had bought into. I would take Turbo with me every chance I could. He would stay in the kennel there or with my truck and I would go out for my evening hunt. One evening after getting back to my truck, one of the other members of the lease came back and informed a few of us that he had shot a buck, his first buck with a bow. I offered up Turbo's assistance, but the gentlemen declined saying he and his friend could find it. My response was a simple, "o.k., I will be here for 40 minutes and then we have to leave, just let me know if you do need our help." Thirty five minutes later, the same gentleman came back to my truck and asked if I would please take Turbo for a spin. Now it was time to really see how well Turbo and I paid attention. He took us to the arrow, which was covered in blood. Going into tracking mode, I gave Turbo my command word "Track 'em" and off we went. After several twists and turns through the cut over field, Turbo dove into a thicket and barked. Crawling on our hands and knees we could see the white belly hair of the buck. Turbo had just recovered his first deer in less than 10 minutes. Needless to say the gentleman became a true believer in the Catahoula's ability and was thankful to the point of embarrassment. I was as proud as I could be with Turbo.

Our second and in my opinion most remarkable find was the following season. This time Turbo and I were hunting the South Louisiana marsh at my friend's camp. For those of you who are not familiar with a marsh, it is similar to an African savannah, only it floats on water. That is my best description that I can come up with. That evening one of the guests at the camp shot a doe in one of the more "soft areas" of the marsh. By that I mean, the ground is really soft and a person sinks easily when they walk on it. I recommended that we go back in the morning since the weather was going to be cool and the deer would not spoil. Bright and early the next morning Turbo and I load up in the boat to begin our search. Upon arriving at the stand site, I asked the young man to point in the direction that he last saw the doe run. Finding only a few specks of blood, and seeing where the deer has been standing we began our track. The young man was adamantly pointing in the opposite direction that Turbo and I were heading. I informed the young man, that he was free to go the other direction, but I trusted the nose of my dog. Our search was over in a relatively short time, but the most remarkable thing about this particular track is that when Turbo signaled the find, there was no deer to be seen, only a large hole in the marsh and murky water. Taking a minute to assess the area I found the slightest remnants of hair on the water. A quick plunge of the arm into the marsh hole and I felt the hide of the deer. The mere fact that Turbo had for all intensive purposed found a deer underwater was amazing!

There are many other tracking adventures I could tell, but the end results were all the same. My Catahoula trained by Don Abney recovered what we were looking for.

Don, I can't thank you enough for all your help in the past. I look forward to the day I can bring a new dog to you for training and when I can come back for a refresher.